San Jose's Hard Girls are my favorite local band, hands down. They just write great songs.
Posted by AdamD at 9:00 AM No comments: 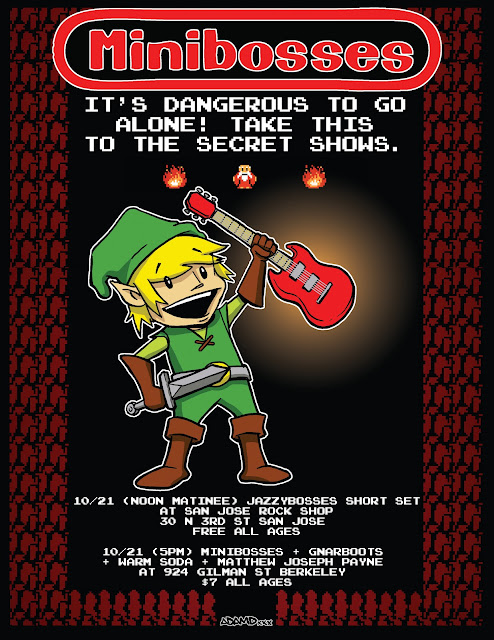 I couldn't tell you where these shows were until NOW. Why? Because there were SECRET SHOWS, duh. If you want a chance to get some art from me and see a fun show, here are two more opportunities!
Posted by AdamD at 6:30 AM No comments:

Want to hear a little of what you're in for this coming weekend? The Minibosses recorded a live set two years ago, but you can time travel here to hear it! Also, this flyer was drawn by Matt Smith, who does a lot of art of the Minibosses. He is real, real good at drawing.
Posted by AdamD at 9:33 PM No comments: 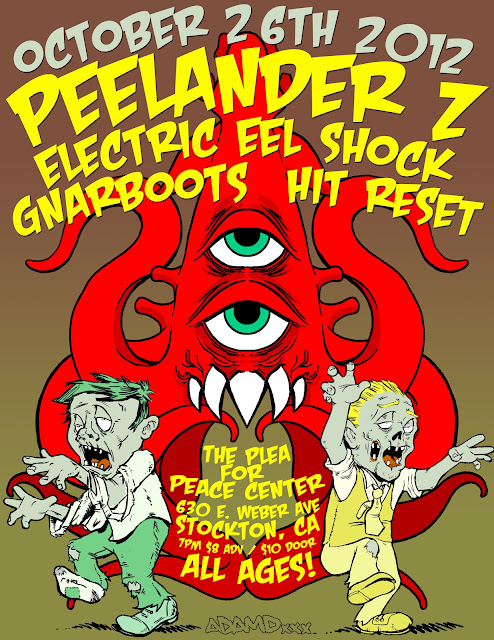 This will be my third time playing with Peelander Z (Gnarboots played with them twice in one day). I've heard this is Peelander Red's last tour, so I feel like this flyer is appropriate.
Posted by AdamD at 3:17 PM No comments:

GET IN THE MINIVAN mini-tour, come buy some art As someone who used to tour quite a bit, I don't like to throw the term "tour" around lightly. I feel like if you aren't out on the road for over a month, and you don't leave your state/time zone, it's not a tour. However, six shows in four days with one band from out of state, I can at least call that a mini-tour.

Gnarboots played last weekend with the Minibosses out in Tempe, AZ. It was insane. I have never been so sore, hoarse and sweaty after a show. If that show was any indication of what this mini-tour is going to be like, I'm gonna be wrecked.

I've had some screen printed posters made, and I will be selling them at the upcoming shows. I'll also bring along some original pieces of art to sell!

Here are the dates! I hope you can make it!

This has got to be just as good.
Posted by AdamD at 2:16 PM No comments:

My band Gnarboots played with Minibosses recently in Santa Cruz. We are now best friends with them. While they are a technically superior group of musicians, we have a similar idea about what makes a concert fun, mainly, being weird, staying in the moment, messing with the audience, and playing the same song over and over and over.

We'll be playing five shows with them over a four day stretch: October 18th - 21st. They're also flying us out to Arizona this week to play their 250th show! It is going to get weird up in there. Hopefully Bob makes sure to bring his papers. Y.I.K.E.S!