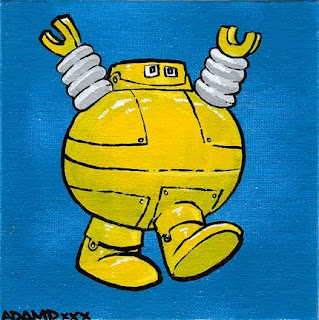 Name: 0000kurt
Serial #: X320204AD77-00101
Function: CUDDLING, LAUGHING AT JOKES, EATING ENGLISH MUFFINS
You may notice that this robot bears a striking resemblance to 0000karl, which is part of why I held off on posting it. However, I just looked at it again and thought it would be fun for people to look at. The nice folks who bought 0000karl bought a few other robots, so when I told them about the double-sell, they just asked for another similar to him. It's interesting to look at the difference between the two, since I did 0000karl in the at the beginning of the project, and this one at the very, very end. You can really see the difference.
Posted by AdamD at 7:00 AM