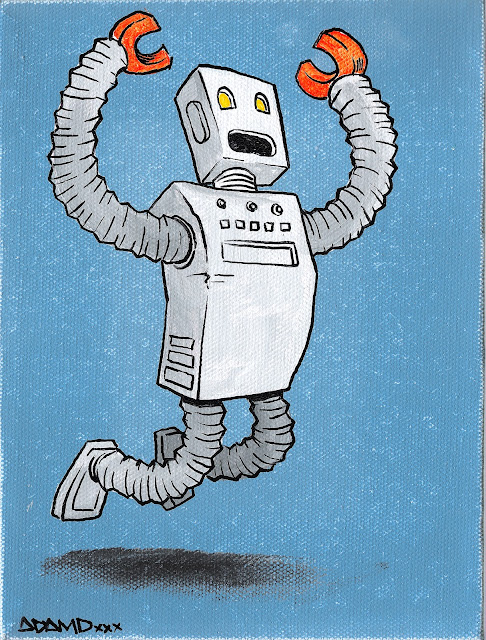 Sometimes it's so exciting to be alive that you have to just jump for joy! Sometimes your artificial life feels so real you just have to jump for joy! Whoever buys this from me this weekend at the San Francisco Zine Festival is going to have to let me take a jump photo of them with this painting.
Posted by AdamD at 11:29 AM No comments: 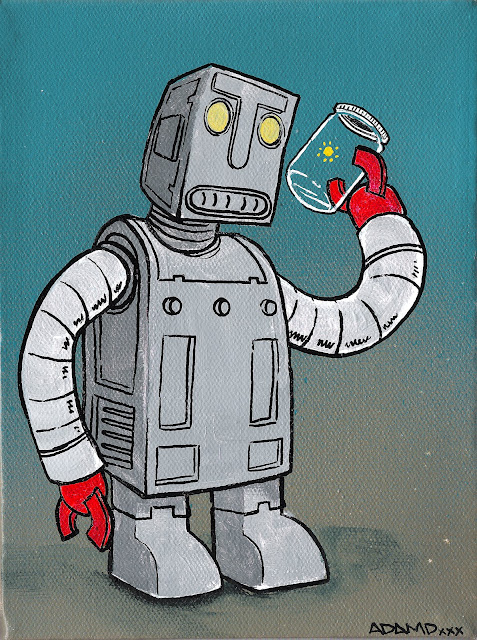 You can't catch lightning in a bottle, but you can catch lightning bugs in a jar! Come buy this painting from me this weekend at the San Francisco Zine Festival!
Posted by AdamD at 9:00 AM No comments: 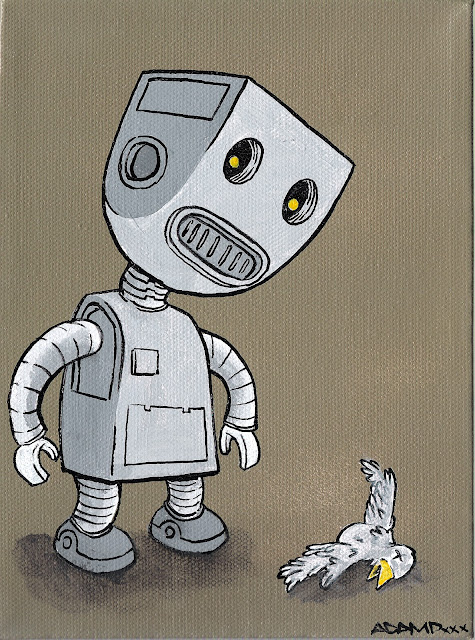 This week I'm going to be putting up some of the paintings I've been working on to sell at the San Francisco Zine Festival (which is this coming weekend). This is one of those paintings. You can expect a couple a day until a) I run out of paintings to post or b) the work week is over and I'm at the festival. If you're anywhere nearby, its a super fun event to check out, a bunch of my favorite artists will be there and it's FREE!

This is such a good band name, and such a good album cover. I'm already nostalgic for the span of Bay Bridge that will be replaced... well, whenever. They've been working on the new span for a long time, and I have to say I think it looks lame compared to the original span.
Anyhow, yeah! Gnarboots played a show with this band (made up of dudes I've know from other bands) and they were really good. This was recorded in the same practice space as most of the Gnarboots stuff. Basically, this band is Gnarboots, except they are called Eastern Span. 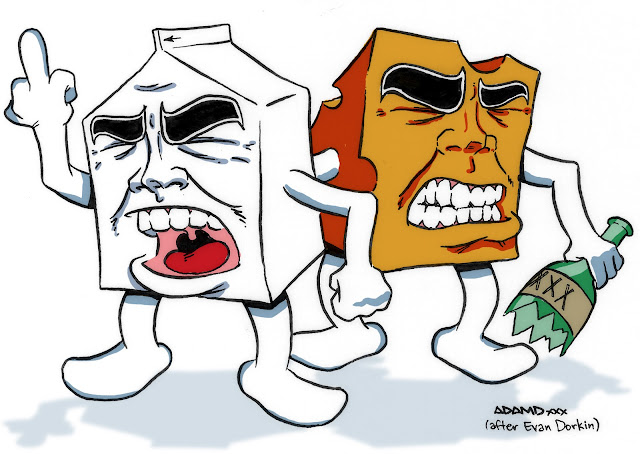 Rather than stealing stuff off of the internet, I prefer to make my own clues for the 100 Dinosaur Scavenger Hunt whenever possible. Unfortunately, sometimes this isn't totally feasible. The other day when I set up hunt #38 (which was in San Jose) I originally modified a picture of Evan Dorkin's Milk & Cheese that I found online, and that is the clue that appears on the site. However, the next morning I got changed my mind and decided I wanted to try drawing them myself. I used to doodle them all the time back when I read the comic books. I drew this version of Milk & Cheese, but didn't get it scanned in time to put up for the scavenger hunt. I colored it this afternoon for fun. I didn't use any reference for the drawings, so I messed up a few details.
Posted by AdamD at 4:42 PM No comments: 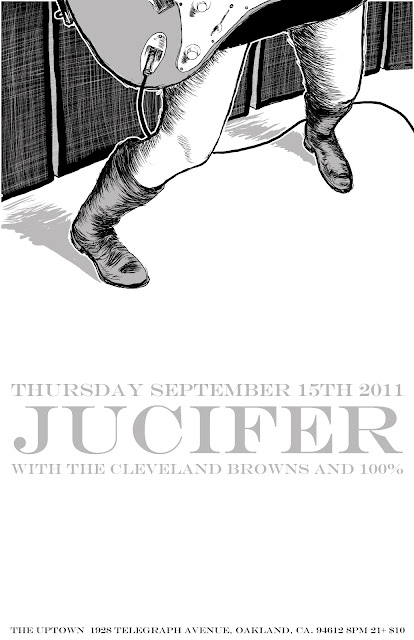 This show is going to be LOUD. Please wear ear plugs.
Posted by AdamD at 4:08 PM 1 comment:

I've been trying to put into words how this recording sounds. Gavin from The Doormice sings on this. It's six songs, but it really it could be split up into about ten. Some of the songs change so much that by the end, you have to check to make sure you're still listening to the same song. Other songs are more sonic sculpture, patchwork quilts of layered sounds. As far as local, self-released, independent music goes, this is pretty far from the usual fare.
While the whole album has it's own actual narrative, the whole thing sounds to me like: It's the last day of getting over a head cold. You've taken too much cough medicine, and you're headed out for the first time in over a week. The collar of your shirt is cold and damp because you didn't do a very good job drying your hair when you got out of the shower, which could use a trim. You're supposed to meet a friend you haven't seen in years at a cafe across town in a neighborhood you're not familiar with, and you wind up getting off the bus ten blocks from where the cafe is supposed to be. You only wore a thin jacket, and its a lot colder out today than you had expected it to be. When you finally arrive at the cafe, it's just an abandoned building. 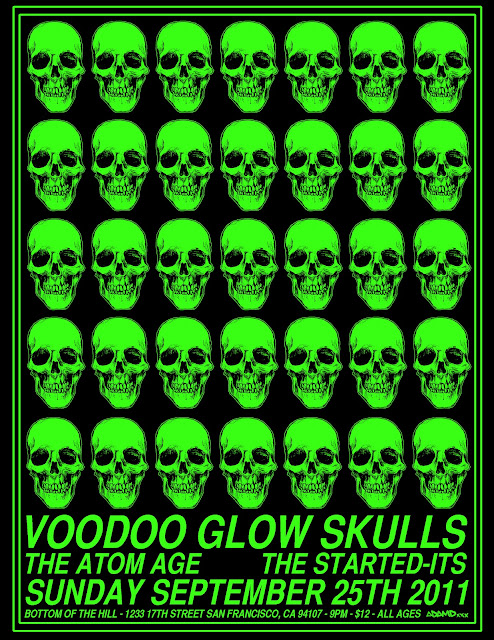 I watched Frank from VGS huff spray paint backstage at a show once.
Posted by AdamD at 8:00 AM No comments: 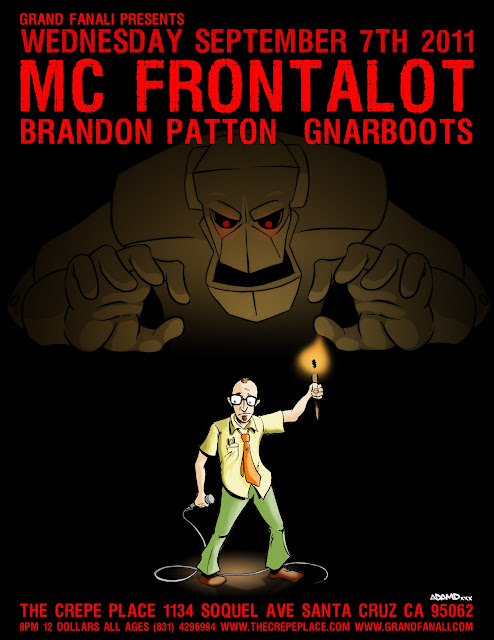 Short hardcore songs with interesting lyrics. This recording is old, but hey, it's new to me and you! Also, they have this really awesome shirt. Someone buy me this shirt, please.
Posted by AdamD at 2:08 PM No comments: 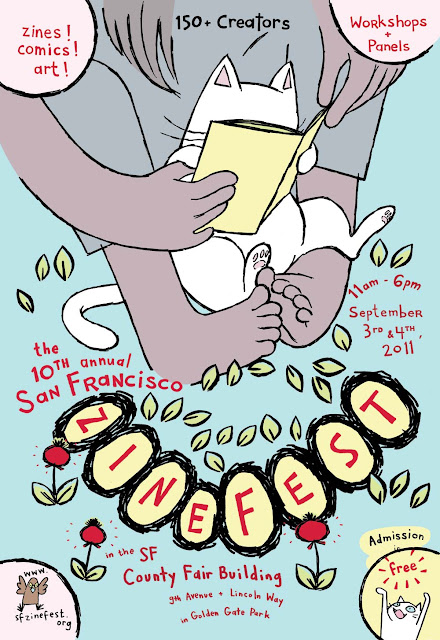 I had a table at this event in 2009, I missed having a table at this last year, but this year I will be there! This is a really fun event with a ton of creative folks all in one place, and it's FREE! I plan on having a bunch of my zines available, along with new paintings, which I'll start posting here as I finish them! I have a lot of ideas for things I'd like to have available at this event, hopefully I will have enough time to put it all together... lots to do before the event!

Do you have an idea for something I should have available at this event? Any requests for things I should paint? leave me a message in the comments below.
Posted by AdamD at 8:00 AM No comments:

I Drew This: Rocket Reuse Sandwich Board 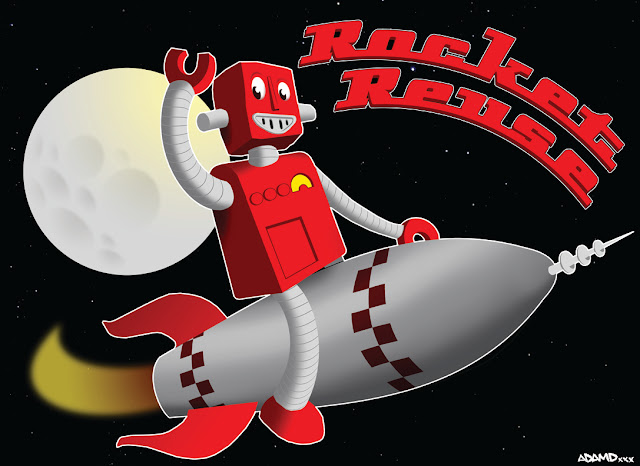 A while back I noticed that Blue Rectangle, my favorite local spot to pick up used books, CDs, DVDs, video games and the like (and it's within walking distance of my home!) had changed their name to Rocket Reuse. Same location, same store, just new ownership and a fresh new name. I jumped on the chance to help them with a little store branding, and hopefully I can switch out the sign every few months when I get the chance to crank out some new art. I was a little slower than I would have liked to have been finishing this (other stuff kept coming up, plus baby) but I'm happy with how it came out, and it's fun for me to walk by it when I'm out for a stroll.

This is a project featuring Chino Moreno (Deftones) and Shaun Lopez (FAR). The first time I saw the Deftones was in 1993 at the Playhouse theater in Morgan Hill. Salmon, who were the local draw, played main support. After they played, the venue emptied out, and there were probably only about 20 people there to see the Deftones. They were totally amazing, and the few people that decided to stick around went bananas. I had bummed enough money off of my friends and random people at the show to buy a demo tape and a t-shirt. I remember handing their merch girl handfuls of pennies I had begged from my friend's car ashtrays. After the show, Chino snapped my friend's Jay's skateboard in the parking lot trying to land some trick. I actually missed the first time FAR came through town, because I was grounded for sneaking off to a Skankin' Pickle show. My friends had picked up a copy of their demo tape, and we listened to it a ton.
Posted by AdamD at 8:30 AM No comments: 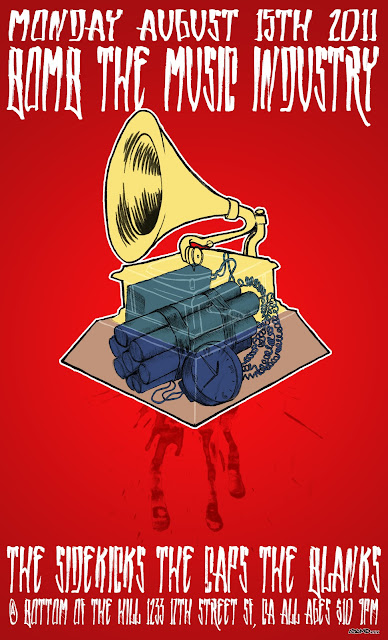 I listened to this while walking around San Francisco, exploring empty stretches of concrete hoping to find some artistic inspiration. Perfect soundtrack for walking around alone, aimlessly.