My favorite track on Comadre's Mixtape Vol. 3 is a song called "Delirium" by Atlas. If this was an physical mixtape, this part would be showing some wear by now considering how much I've listened to it. I looked around online for more music, but couldn't find any. Turns out I couldn't find any because there wasn't any... until now! Comadre is hosting a free download of the new Atlas record here: http://www.siqshit.com/
Posted by AdamD at 8:30 AM No comments:

(I can use this site to travel through time)

I forgot to post anything last week (whoops!) so now, I'm posting it from the future, like Marty McFly. I'll hide this and maybe no one will read it. I'm currently working on some shirt designs for Hard Girls, more flyers for Grand Fanali Presents, and hatching plans for some other slick stuff. Gnarboots is going to start recording on September 4th, I'll be doing the layout for that. We played a show on Friday and it was really awkward for us for several reason, probably the biggest reason was that we were wearing these creepy cat masks. We also have a new song about cats that wear pajamas. It sounds like something you would hear on Dr. Demento. Well, hope you're doing well. Be sure to leave a comment if you read this. I need another cup of coffee.
Posted by AdamD at 10:20 AM No comments:

Hailing from Redwood City (hey, have I mentioned how much I like it when a band in the bay area claims where they are actually from rather than claiming a larger city nearby? Seriously, if another band from Piedmont claims they are from Oakland, I'm bashing skulls), this band features past members of Anti-45 and HeartCrossLove, both bands I knew about, but somehow this slipped under my radar for the past few years. This is hardcore played by dudes who obviously listen to way more music than just hardcore. Lots of weirdness thrown in rather than just 1,000 musical punches in the face. Comadre currates a free mixtape series, runs their own record label, does their own graphic design and tours a ton. Way to go dudes!
Posted by AdamD at 8:30 AM No comments:

Here's a few sketches I did that I thought were kinda fun. I probably did these while I was on hold or while answering phones at the switchboard... 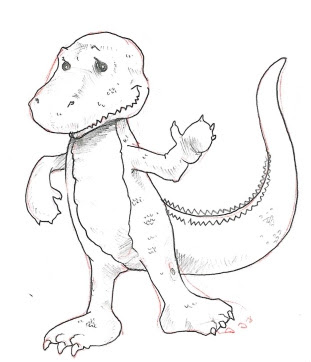 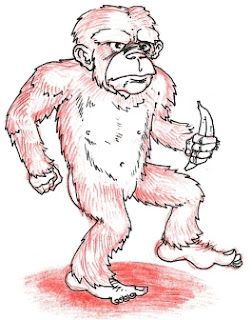 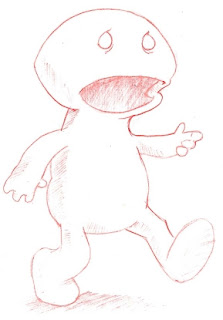 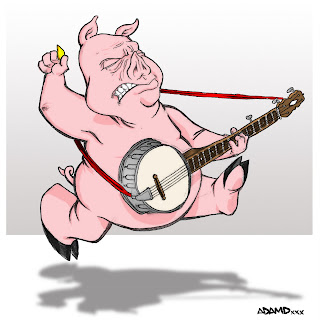 There is a blog with illustrations of nothing but Dualing Banjo Pigs. I am now included on that site here.
I did this fun illustration last week after seeing this awesome post by Jake Parker (who is my current artist man-crush). I thought "Why not?!" and drew this immediatly after finishing Drawing Challenge #4. I colored it after a delicious breakfast of waffles Saturday morning while watching Robotech.

Does anyone know about any other blogs like this? I'd like to participate in as many of these as I possibly can, because they're a ton of fun! EMAIL ME!
Posted by AdamD at 2:00 PM 2 comments:

This came out forever ago, but there's a good chance you missed it if you were busy with life. One of my absolute favorite bands in high school, NIN took a hiatus from making music I cared about during my 20's and returned with some killer jams as my 30's arrived. I'll take the availability of this album for free as a "we're sorry" for making me buy The Fragile (actually, I think my brother got that album for me as a christmas present... ok, fine. This can be a "we're sorry for making you buy 20 different CD singles with a bunch of crummy half assed remixes on them.")

Apology accepted.
Posted by AdamD at 8:30 AM No comments: 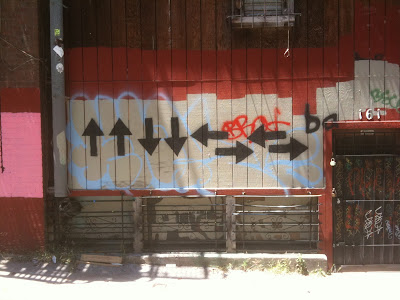 Photo taken in an alley in SF Chinatown, near the site of Nonchalance/Jejune Institute's Act 1.
I guess that door is supposed to be "start"?
Posted by AdamD at 4:24 PM No comments:

(I'm going to try to post these as I draw them this time, rather than wait until the end and post them. I think that will give a better impression of how much time I spend per sketch. I got a late start today, and did this on the last half of my lunch break.)
Posted by AdamD at 1:32 PM No comments:

Let's do another one of these sooner than later! I still have to crank out the painting for the winner of DC#3, but let's keep the ball rolling!


DRAWING CHALLENGE #4!!
Here's the run-down in case you forgot: You come up with the ideas, I draw the first 10 that arrive in the comments below. Write one line that can be illustrated (example: ham sandwich saves the day.)
Because I'm getting old and mean, RULES apply to this! You need to learn to follow rules, or a cement mixer will run you over when you forget to look both ways!! Here's the rules:
As usual, I will draw and post all the entries. The one that I like the best I will turn into a painting, which will be given to the winning commenter FOR FREEE!
Posted by AdamD at 3:04 PM 13 comments: 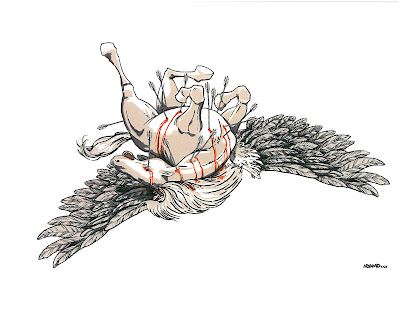 This was one of the first illustrations I colored using my new wacom tablet that my wife bought me for my birthday. This print can be purchased through the paypal store to the right!
Posted by AdamD at 1:58 PM No comments:


I wanted to try painting something without any hard black lines, or any black paint at all. This is the result. This painting looks a lot brighter in real life.
Again, if you're interested in purchasing this painting, shoot me an email: xadamdx@gmail.com ...these PayPal buttons never want to work right.
You can now purchase this painting using the store on the right!
Posted by AdamD at 11:44 AM No comments:

Don't be a Spock - Adjust your monitor height

UPDATE: Daaaang! Thanks for clicking through to my site! +20,000 of you so far... Here's a link to a printable PDF version made by commenter Dawson, perfect to hang on the wall of your cubicle.
While I've got you here, please take a second to look at some of the art I've posted here, like the 100 ROBOTS I painted a few months back, or to follow this blog, or to buy some art from the store link to the right. Thanks! 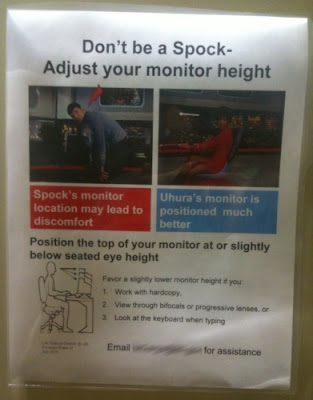 Posted in the bathroom at the Lawrence Berkeley National Laboratory.
(Thanks Mary!)
Posted by AdamD at 11:14 PM 7 comments:

Here's another painting I did a little while back. I was thinking about this picture when I painted it.
Still having trouble with the stupid paypal buttons, so if you're interested in this painting, just shoot me an email: xadamdx@gmail.com
Posted by AdamD at 10:12 AM No comments:

I still have three paintings left from this series, $10 a piece, includes free shipping. Each painting measures 3" square, and they're painted on tiny little canvases, as opposed to canvas board. Get 'em while you can! 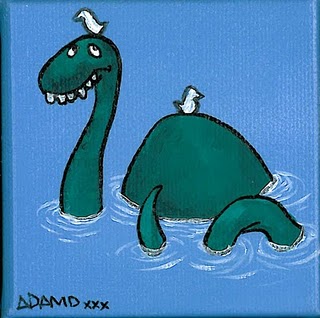 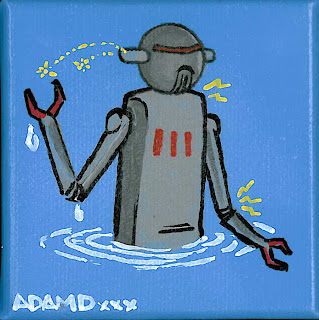 Music Monday: The Steal + Return of the Fireside Bowl

I know this album cover looks like the album cover of another band, but hear me out! This is some really awesome hardcore punk rock, without any of the tough guy machismo or silly haircuts sometimes associated with those musical descriptions. This is fast, catchy, fun punk rock that I'm bummed I never got to see performed live. They were from Brighton, England, so I'd wager we even have some mutual friends. 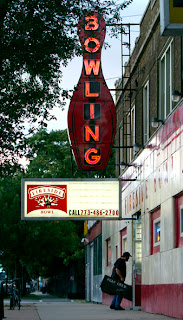 Also, the Fireside Bowl in Chicago is returning to hosting punk rock shows after a 6 year hiatus! This is exciting news to me as Link 80 performed there multiple times over the years (7 times in one year alone) and our shows there were always EPIC. I was worried that the remodeling they did would ruin the space, but judging by the pictures it looks identical to how I remember it +10 years ago. Check out this article here.
*fun fact: I trimmed the gross ends off of my gross dreadlocks outside of this venue one afternoon using the mirror on the van to see what I was doing. I took a particularly gross piece of my hair and taped it up on the wall above the stage. It was there for at least a year.
Posted by AdamD at 9:49 AM No comments: