﻿﻿ ﻿﻿
Contrary to my usually posting punk-type bands on here, I'm a huge nerd about techno and electronic music. I've listened to the first Moby record A LOT. I went to see Prodigy live. Erasure is one of my all-time favorite bands. I recently bought a copy of LA STYLE at a thrift store.
I blame my brother.
Giant Boy is Michael Lindow, who also plays bass in my LDS hardcore band, Primary. He also contributed a version of "Fantasy" to the recent Gnarboots iPod memorial show in San Jose, along with a track on the Gnarboots mixtape.
Listening to this makes me think a Giant Boy/Tall Guy split isn't a bad idea.
Posted by AdamD at 11:15 AM No comments: 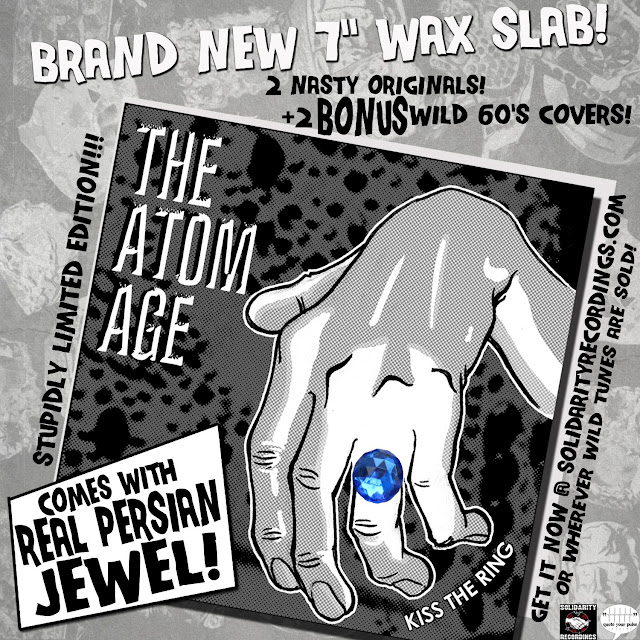 I cranked this out the other day for my friends in The Atom Age. I saw that they were releasing a series of 7" records, so I asked if I could help out with the art. They already had the idea for what they wanted, which made drawing this pretty easy. The jewels are actually stuck onto the sleeve, pretty neat. The reverse side of the sleeve has the other side of the hand. I didn't lay out this ad, but I like it! It's W-I-L-D!!
Posted by AdamD at 11:10 AM No comments:

I Drew This: Fact Beats Fiction 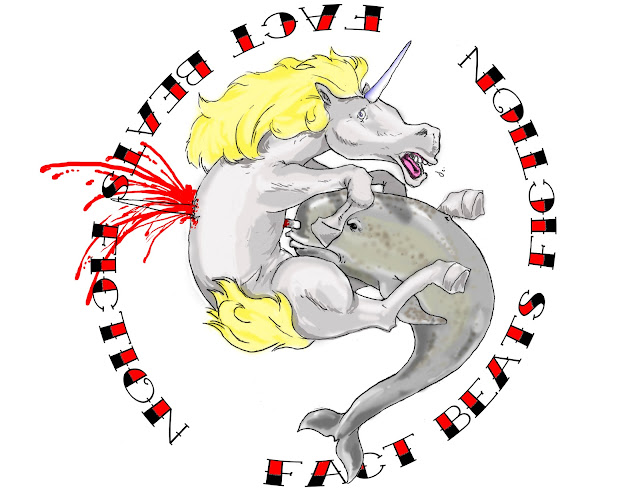 I drew this after reading an exchange between a couple of buddies on the 'book, back when I used to work on art on my computer in my cubicle. I think this is the second thing I colored with my wacom tablet.
Posted by AdamD at 12:49 PM 2 comments:

﻿ When you've been playing music for over half your life, you end up with a bunch of odds and ends that no one really ever hears. Demos of songs, weird live recordings, inside jokes that get taken way further than they ever should. We felt like it was important to "clean out the pipes" so to speak before releasing the new Gnarboots album. There's a lot of stuff on here.
Posted by AdamD at 7:33 AM No comments:

Where are there now? Waving Robot 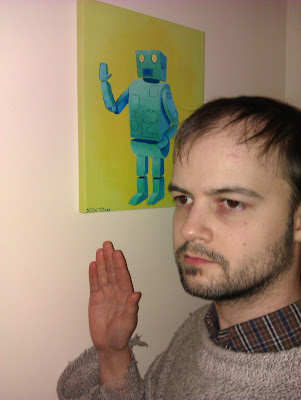 Johnathan Jeffries and my blue robot painting wave hello from the United Kingdom. That sweater is some definite English winter-wear!
Posted by AdamD at 8:00 AM No comments: 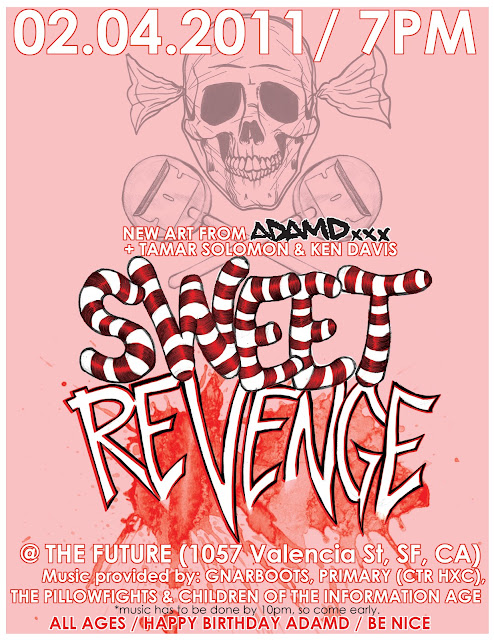 My friend Avi just bought a house in the mission, and this house is called THE FUTURE! He's been having some shows there, and running his record label out of the basement. When he asked me if I'd be interested in having an art show there on a First Friday, I thought we could up the ante by having it on my 34th Birthday. In addition to all the new art I'll be showing at this event, I'll be performing in two bands: Gnarboots and Primary (my hardcore band that plays mormon sunday school song). I don't wanna give away too much all at once, so for now just mark your calendar.
Posted by AdamD at 2:03 PM No comments:

Do this at your next dinner party.

My friend Loe invited us over for a dinner party a little while back and she had the awesome idea of setting everyone up with paper place mats to doodle on. In addition to setting the table with the regular condiments, she had a few jars full of colored pencils. I hadn't drawn with colored pencils in years, but it was really fun to sit around with my friends, doodling while chatting. Here's my place mat: 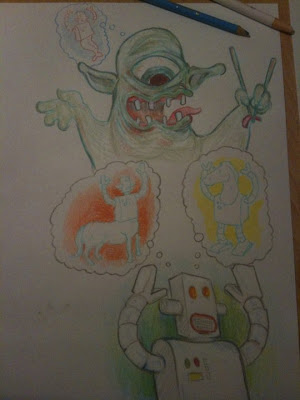 The other night I met up with my wife and some family friends for a dinner at a tapas place (which I think is spanish for "not a lot of food"). About halfway though the meal, I noticed that the tablecloth was covered in paper, so I busted out a felt-tip pen (that I knew wouldn't bleed through, mind you) and busted out a quick robot. I then had a request for a "Lydia-Robot", from Lydia, the cheerleader sitting across the table from us. So, I drew a cheerleader robot! 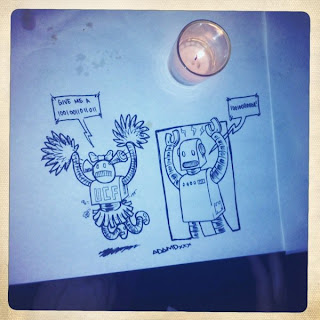 Next time you come over for dinner, you can expect us to have paper place mats on the table with a side of drawing implements!
Posted by AdamD at 8:00 AM No comments:

A few months ago my wife went to pick up some groceries at Trader Joe's. She noticed they had a sign up looking to hire a sign painter, since they do all of their art and signage in-store. After a little procrastination, I went and applied for the position. After a long wait, they called me up and told me to come in the next day. While this gig definitely isn't going to pay the bills (I haven't had a job that paid this little the whole time I've lived in the bay area. yikes...), it's the first job I've had where I don't slack off AT ALL the entire time I am there. This is probably because usually when I'm slacking off, I'm drawing, which is what I'm actually being paid to do here.
I've been posting these up on Facebook as I draw them, but thought it might be nice to put them up here for everyone to see. You can click on them to see them bigger, or you can go into the Alameda Trader Joe's and see them in person. 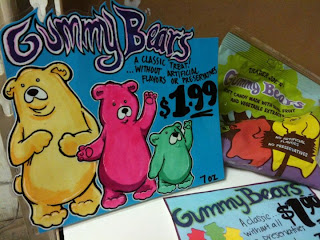 Clockwise from top-left: My sign, the packaging, the sign I decided to replace while price-checking a section for inventory. 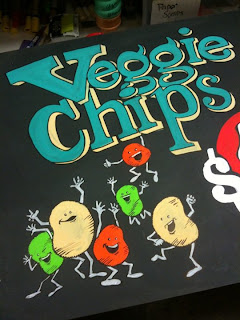 I had a lot of fun painting this but it wound up causing some drama since there was already a sign painted. Communication is key. 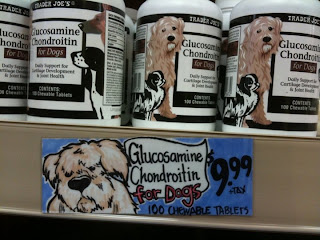 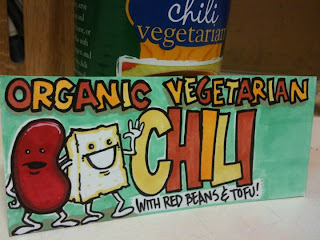 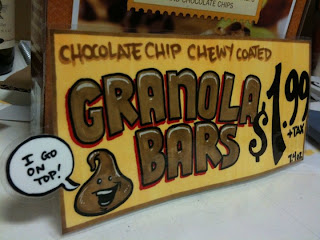 That'll do, chippy. That'll do. 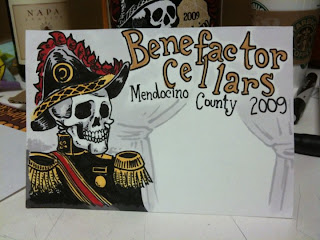 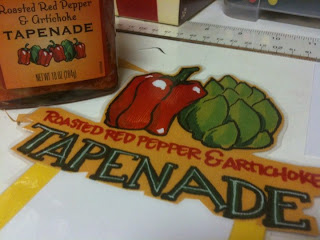 This one is kinda lazy, but I think it came out pretty good. 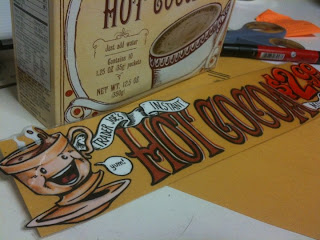 Everything gets a face! 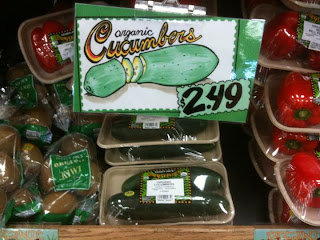 I wanted to make this a little cucumber-guy getting chopped up, but I knew someone would complain about that. 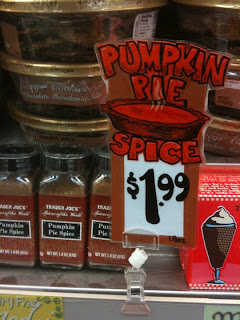 I think Pumpkin Pie is gross. 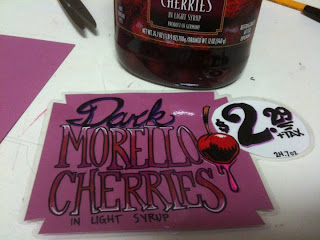 Drew this at 6am on a Sunday. 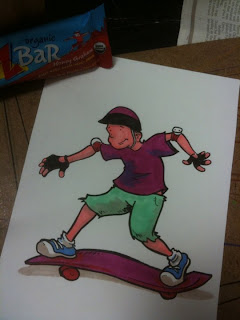 This one wound up getting shrunk down so small you can't really see it on the sign. I also added some punk rock patches (the Asian Man Records one is the only one that shows) to his shorts in the final version. 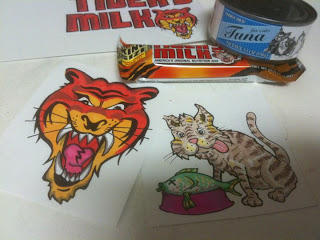 The original "Tuna For Cats" sign had a photograph cut out of someone's cat instead of an illustration. 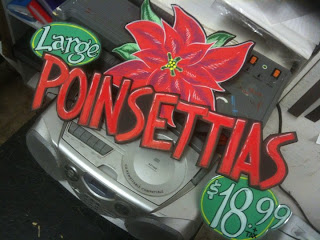 This was my first sign my first night working solo.
Posted by AdamD at 8:30 AM 2 comments:

What originally was conceived as a triptych became a four-part painting. Why? Why not! Here's a picture of just the head, taken with my phone: 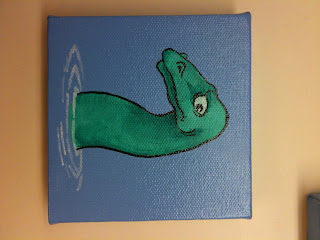 I signed them on the back so my blocky signature wasn't mucking up the canvases four times. I thought it looked a bit cleaner. Here's the initial sketches: 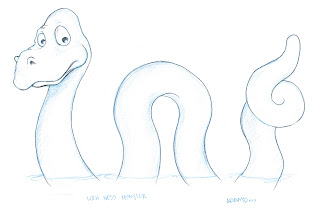 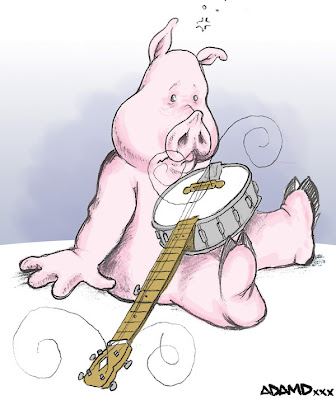 I drew this a while back, and got around to coloring it the other day. Now its up on the Dualing Banjo Pigs site! It could almost be the end result of my other Banjo Pig.
﻿
Posted by AdamD at 3:01 PM No comments:

﻿ ﻿Played a show with these dudes this past weekend and they were great. Really solid, catchy hardcore-influenced punk rock. That said, I haven't heard this recording yet, but I'll be downloading it later on. I'm just going to go with my gut instinct since there live show was good and put this up here.
Posted by AdamD at 2:15 PM No comments:

Using headphones always put me in the bad habit of listening to the same album for weeks on end. Last month it was P.O.S / Never Better. This month so far it has been this record, although in the next couple days I think that Strange Spring Air will be getting some headphone time as well. Also, this Saturday this show will be happening, and it turns out that Aaron Carnes and I will be sitting in as part of Shinobu. So, if you can come out, I'll be playing some of these songs! As Bob would say, "NIIIIIICE!"
﻿
Posted by AdamD at 2:36 PM No comments: 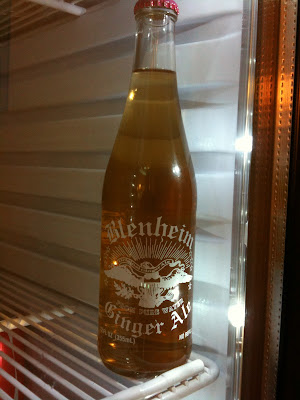 ACHTUNG! This beverage has some bite! It's really gingery. Also, screen printed bottles look cool. I don't know that I would drink this all the time (Plus, I guess it's actually a ginger ale, but whatever) but its definitely on the better side of these drinks. Probably would be good with a hearty bratwurst loaded up with sauerkraut.
Posted by AdamD at 8:00 AM No comments: 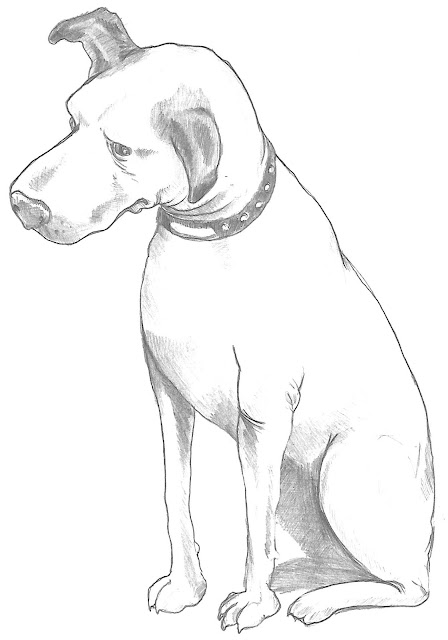 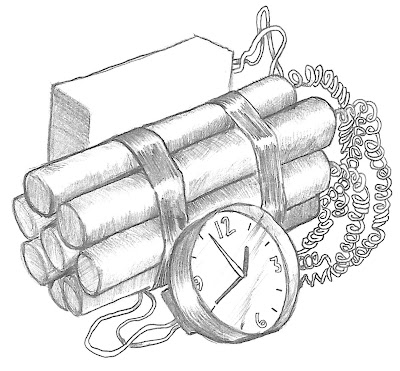 I scanned these on the scanner at my office job, hence the weird greyness to the whole thing. Also, this is before I was doing a lot of the clean-up in photoshop, so these sketches are pretty clean already. It's fun to be able to look back at things I barely drew 5-6 months ago and see how much I've altered my gameplan for drawing!
Posted by AdamD at 8:30 AM 1 comment:

﻿﻿﻿ ﻿﻿﻿
A few months ago I threw together some images for these bands to send off to the printer for a 7" they were putting out. Then a few months after that, they asked me where the cover was! No one had asked me to do a cover, but I was happy to oblige. This 7" record will be available January 15th at Homestead Lanes, and there's a good chance that Gnarboots will be acting as the backing band for Shinobu for part of this show. I'm planning on learning how to play: I Am A Lightning Bolt, Moms & Dads, Regular Love Triangle, Sometimes I Wish That I Were A Cat, and Hotty Pants Sweet Voice.
Posted by AdamD at 12:02 PM No comments: