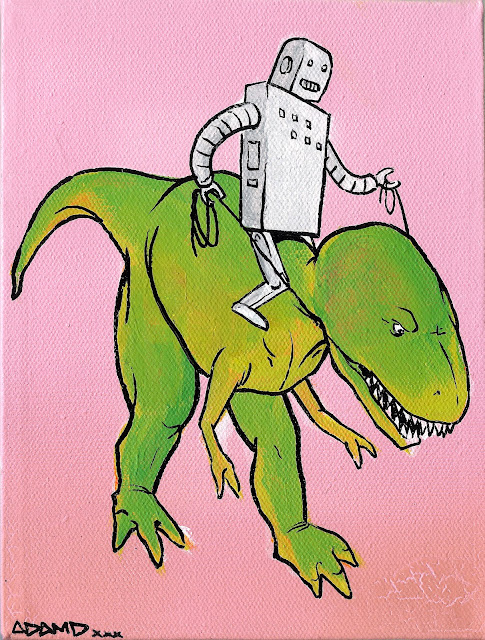 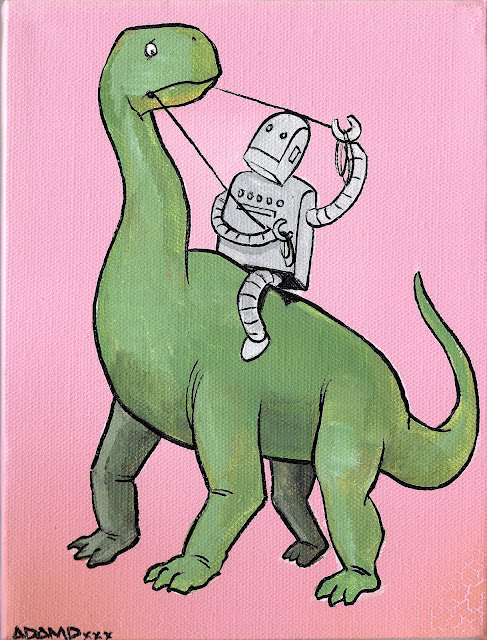 I painted these to sell at the SF zine fest. They were snatched up really quick. I should have painted more of these. Well, these and zombies. Everybody loves zombies.
Posted by AdamD at 1:44 PM 1 comment: 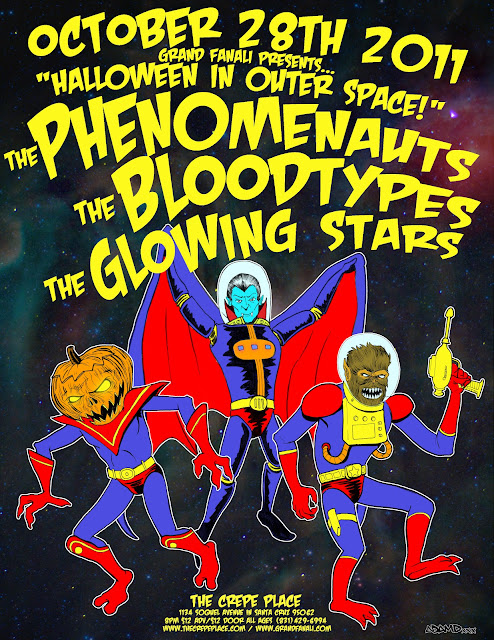 I wasn't sure what I was going to post today, until my friend Roman posted this today. I'm about halfway though it right now, and it's real good.
Posted by AdamD at 1:52 PM No comments:

Here's another one! Another little robot painting! Painted by me! For you!
Posted by AdamD at 11:00 AM No comments:

Here's another painting I did for the San Francisco Zine Festival this year, but no one bought. So here it is for you to buy, especially if you like robots and dinosaurs, together!

I added a wrench to this painting so that it looked like they were playing fetch. I didn't take a picture.
Posted by AdamD at 3:29 PM No comments:

I painted this, based on a doodle I did on the back of a business card a while back. If someone buys this painting, I'll post the doodle. If not, well, you'll never get to see it. How's that for salesmanship? 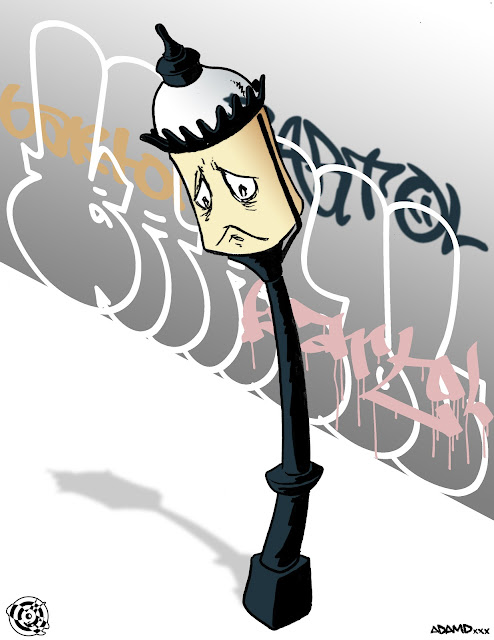 You Should Buy This: Winter Stroll Print (SOLD) 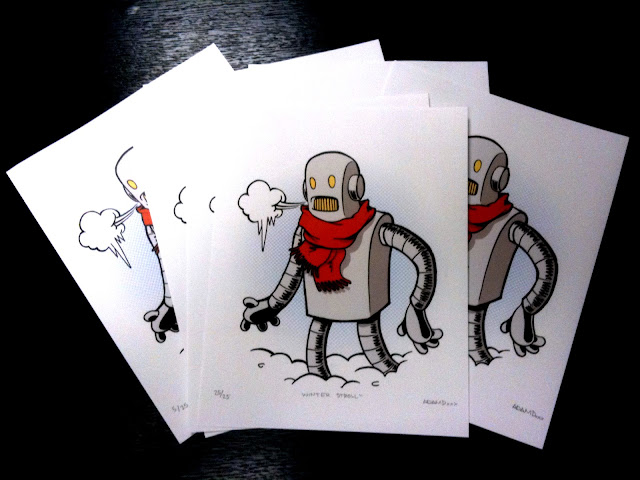 This was my second year at the SF Zine Fest, so I kinda had a little better idea of what to expect. I made sure to paint a bunch of paintings in advance, printed up a bunch of different zines, and dug in for two days of creativity overload. This was the tenth year of the festival, and it was much bigger than in previous years. I didn't get a chance to walk around too much, but when I did I was completely overwhelmed with the amount of creativity being pumped out around me.
After the first day, on which I successfully sold off a bunch of paintings, I decided I should get busy painting. this was the first painting I turned out that day: 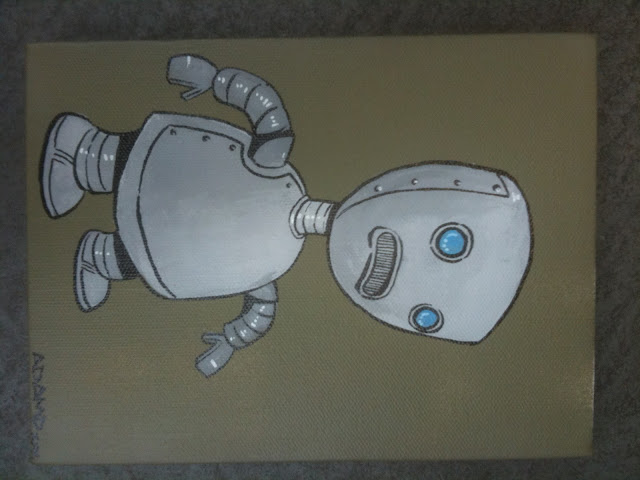 It was snatched up by none other than Bill Chartier, who played guitar in Calling All Monsters (a really awesome local indie band who, sadly, are no longer performing). 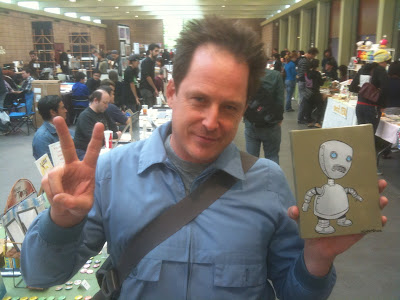 I painted this next, a robot falling out of the sky! 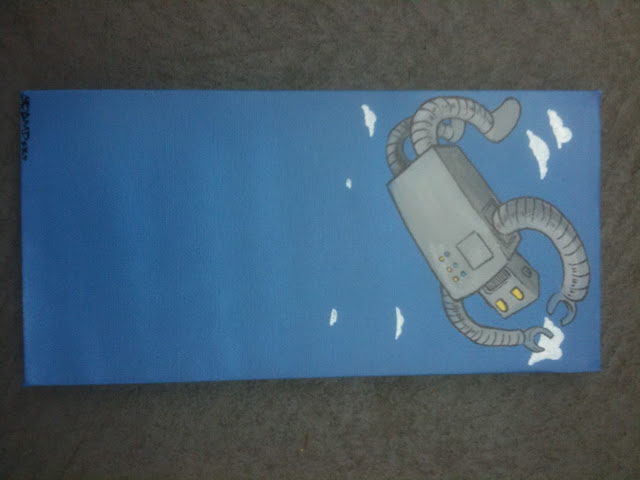 A nice dude named Glenn bought it, but I forgot to take his picture with it! I really like having pictures of the paintings with their new owners, since an event like this is the only time I really get to see the people who purchase my art (unless you're a buddy of mine). Sunday was kind of a blur, between a lack of sleep from being a new father, the usual madness of Zine Fest, and a surprise Gnarboots performance in the atrium. 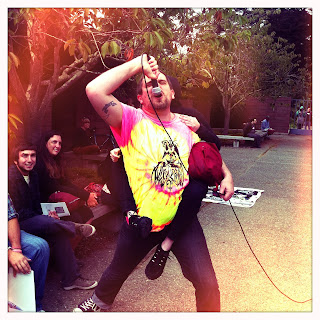 I did manage to get a few pictures of folks who bought paintings: 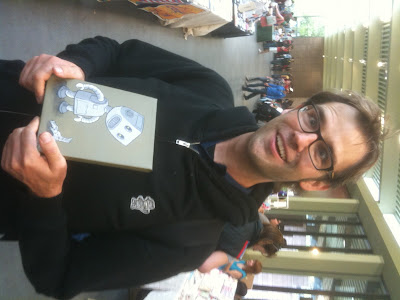 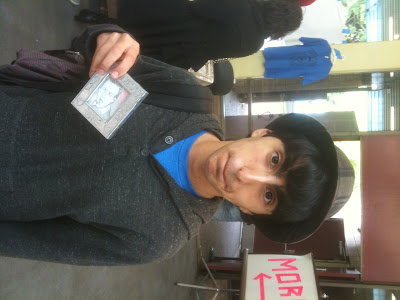 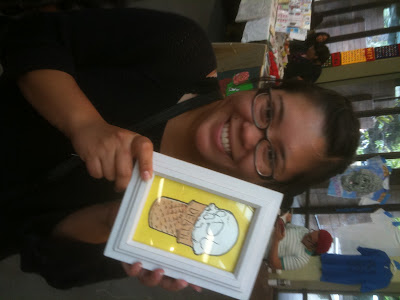 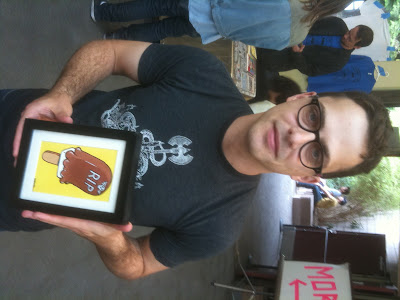 Josh Ellingson continues to be a positive guiding light in my quest to become a full time artist. He stopped by my table, told me my prices were way too low, then proceeded to buy this painting from me. NICE. He also hooked me up with a Square reader, so I was able to take credit cards on the second day! 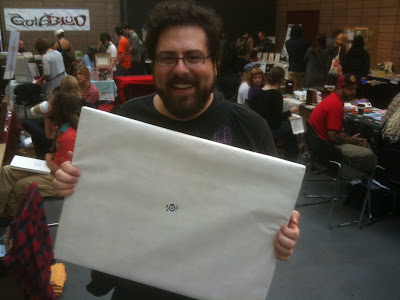 I also used the festival as an excuse to hide a couple of dinosaur paintings. My buddy Jason found this painting. You want to see it? Go look at the 100 Dinosaurs site.

Sorry if you didn't make it out this year, it was a lot of fun. If you would like me to bring the Zine Fest experience to you, you can order a bundle of zines from me here!

First off, the name of this album rules. Secondly, look at that cover. What a great album cover. I downloaded this on the suggestion of Joyce Manor, and I gotta say I'm digging it.
Posted by AdamD at 2:04 PM No comments:

You Should Buy This: Zine Bundle! 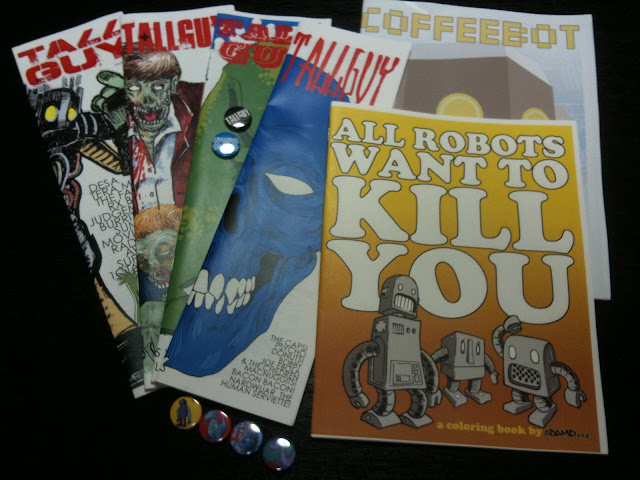 Couldn't make it to the SF Zine Fest this year? Went, but spent so much time looking around you didn't bring anything home? Just want to support me as an artist, and keep my apartment from getting cluttered up with stuff I made?! Pick yourself up a Zine Bundle! Only 15 available, only $10! This includes:

For the last several years, I found myself down the rabbit hole, following the path of Divine Nonchalance. Like many others, I followed in the footsteps of Eva Lucien, hoping that one day she would return from Elsewhere.

Alanna Nuala was Eva Lucien, once from San Francisco, now transplanted to the east coast. Had they remained one and the same person, this recording would have fit perfectly in the world of the SF Savants. Dreamy, fuzzy shoegaze that fits perfectly in that niche when you don't feel like listening to something too heavy or too lite.

Long live the queen of Nonchalance. 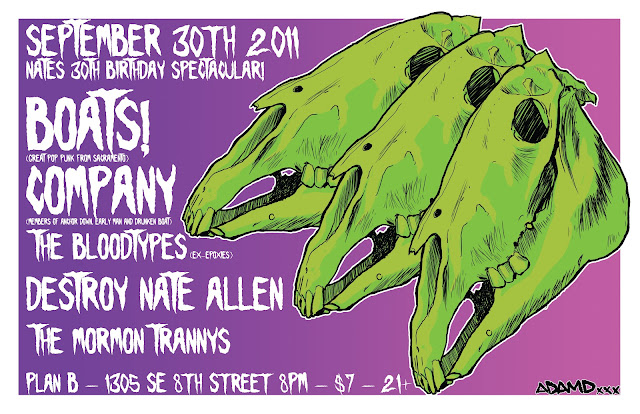 Nate Allen needed a flyer for his birthday show at the end of the month, so I whipped this up. Happy Birthday, Nate!
Posted by AdamD at 9:00 AM No comments: 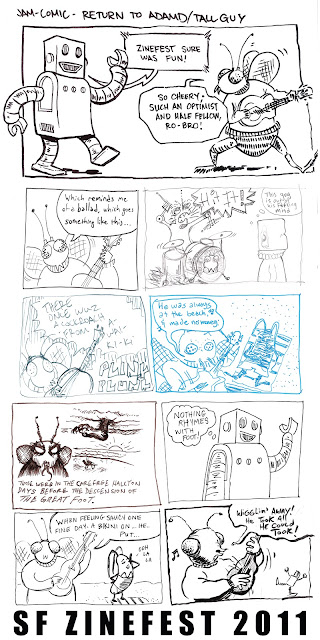 This weekend was the San Francisco Zine Festival (and if you regularly look at this blog, I already beat you over the head with that information) and I had a blast selling paintings, meeting interesting folks and even got to play a set with GNARBOOTS! About halfway through Sunday I realized I hadn't seen anyone sending a jam comic around, something I got to participate in when I had a table two years ago which I really enjoyed (though I never saw the final result)! I threw together the first half of the first panel and passed it to my left to Pat Tong (of House of Tong)... where it went from there I have no idea. If you're one of the awesome artists who worked on this, please let me know in the comments!
Posted by AdamD at 7:19 PM 3 comments:

I recently drew a bunch of flyers for a bunch of shows these guys played in the bay area. Being a father now, I didn't have the chance to make it to any of them, but I did listen to this record a bunch.
Posted by AdamD at 4:11 PM No comments: 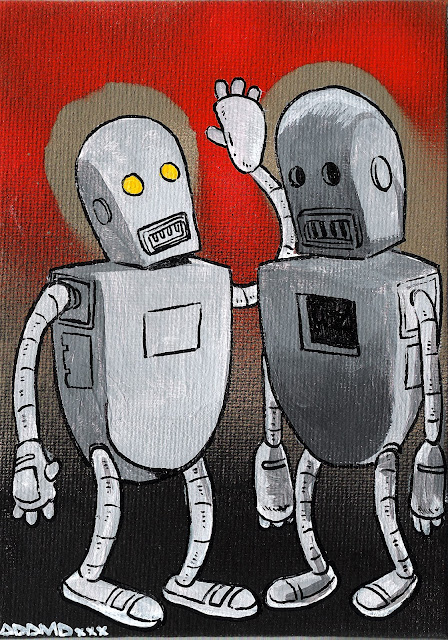 I just realized this painting is missing a shadow. I'm going to add that shadow when I get home from work today. Come to the San Francisco Zine Festival and see if I improved this painting by adding a shadow or ruined it forever!
Posted by AdamD at 5:30 PM 2 comments: 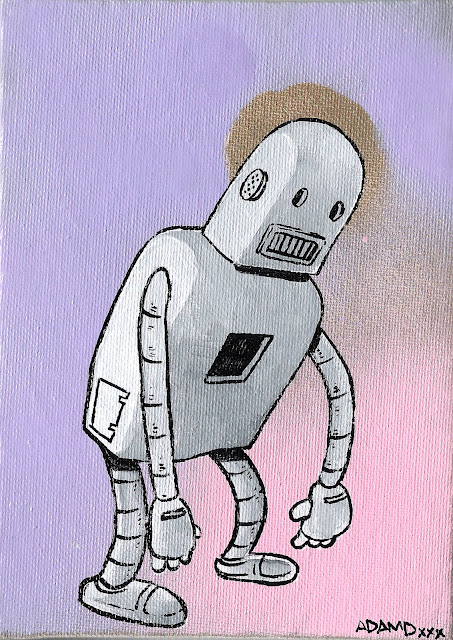 This is how I feel about my job.
If you would like to hire me for my illustration skills, send me an email: xadamdx@gmail.com
Or, just come to the San Francisco Zine Festival and buy this from me. 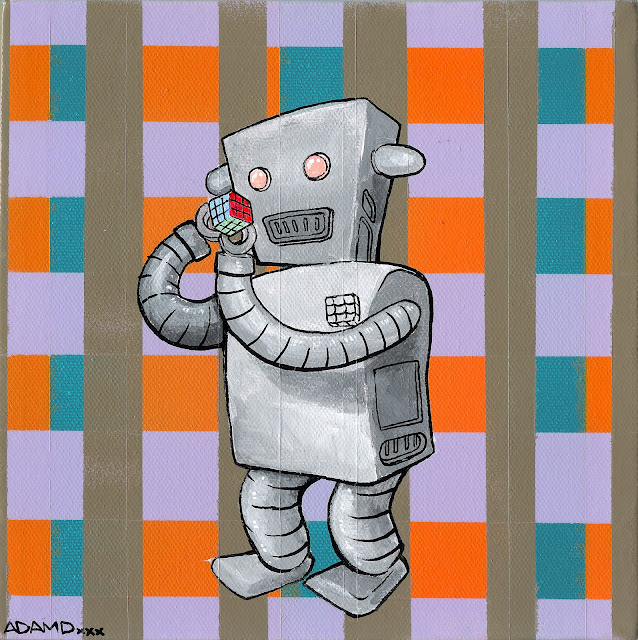 I had a Rubik's cube as a kid. I peeled all the stickers off and put them back on to make it look like I solved it. Maybe that's what this robot did, but probably not.
Posted by AdamD at 7:37 AM 1 comment: