I used to be really opposed to Twitter. I didn't see the point of blurting out every stupid idea that popped into my head. However, I've changed my tune in the last couple of months. First off, its a great way to figure out where all the rad food trucks in the bay area are posted up at any given time. Second, it's pretty rad to be able to drop a line to one of your favorite musicians. Lastly, it comes in handy when you forget to document art that you just sold!
I posted this tweet during the Alameda Holiday Fair:

A couple of days later, I received an email from the nice person who bought the paintings! Along with some picture of the paintings: 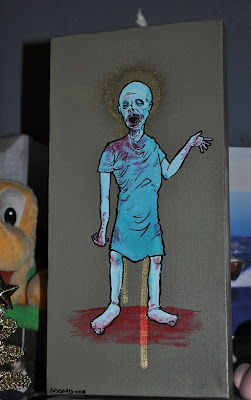 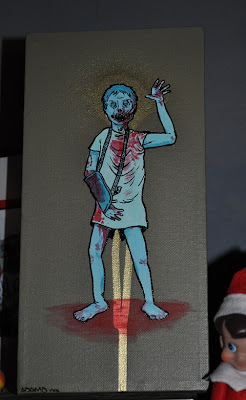 As it turns out, they also won the painting that I had entered into the raffle, "Extra Parts?!"


Twitter is also a good way to find out when I am going to post new clues for the dinosaur painting scavenger hunt I've been doing. If you don't already follow me over there, or if you were like me and didn't see the point of Twitter, maybe now you could give it a second chance.
Posted by AdamD at 11:58 AM