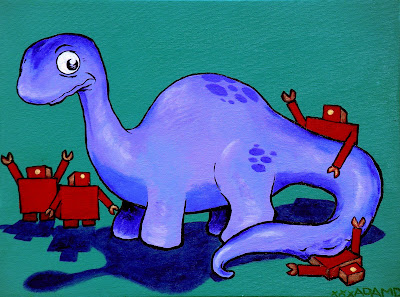 There's nothing like a Brontosaurus to ruin a party. That dumb tail just seems to have a mind of it's own! Even the most well-meaning Thunder Lizard tends to make the needle skip on the record when he enters the party, literally and figuratively! Plus, he's so misunderstood! He's actually an Apatosaurus! These robots don't care either way, they just want him out of the party.
Here's another sketch via ballpoint pen and post-it note. I think I may have drawn this after the painting though. Maybe it was my way of making it up to the robots for having Bruno cause so much trouble: 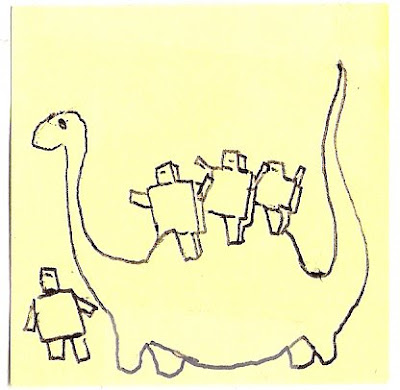 Now there's a painting up with robots AND dinosaurs in it! I thought about buying a proper internet domain for this website, but both dinosaursandrobotsDOTcom and robotsanddinosaursDOTcom are taken! Plus, maybe I'll paint something other than robots and dinosaurs in the future! Maybe I'll paint a nice still life of a bowl of fruit. I might decide to paint some flowers. I could paint bigfoot riding the loch ness monster, eating an ice cream cone and giving the thumbs up! Do you have ideas? Want me to try to paint your idea?! Send me an email and we'll talk: xadamdx@gmail.com