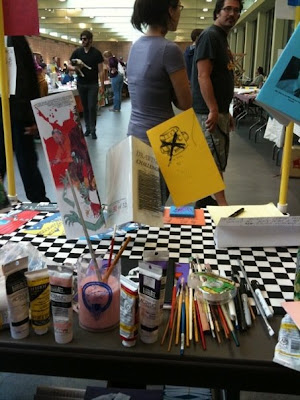 Here's a look in the rearview at the San Francisco Zine Festival. I had a blast. In addition to selling a bunch of zines and a bunch of paintings, I picked up a lot of cool stuff from the other exhibitors and met a lot of great people. I spent the two days alternating between painting, talking to people at my table, painting, drinking coffee, painting, eating burritos and trying to score cool trades from the other tables. I even participated in a collaborative comic that was getting passed around the event! I'll post a link to that once it's online. 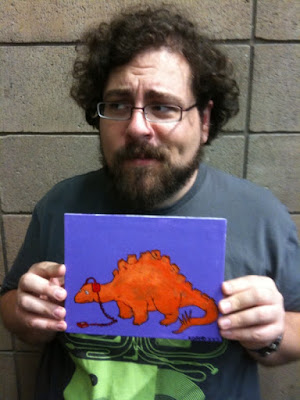 This is my buddy Jason, pictured holding his painting of a stegosaurus listening to a cassette walkman. I know Jason because of this and this, and it was great to see him! If you ever run into him somewhere, do something to make him laugh. He has the best laugh ever! 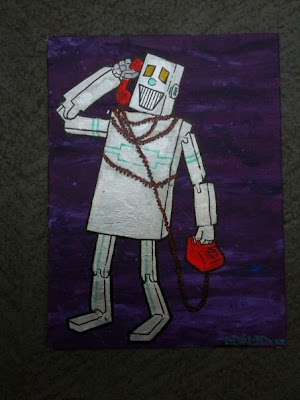 I painted this guy, snapped a picture of him, and he was gone before the paint was even dry! I also sold the jogging dinosaur painting to the same group of people, but forgot to take a picture of them with their paintings in the excitement! Ah well. Also, big ups to Nnekay for painting the background of this painting (collaborative art! unintentionally awesome! high-five!) 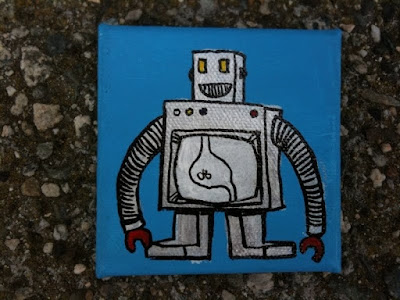 Here's the finished TV robot. The gal who bought it wasn't sure what the tv should have on it, so I though something similar to a pepto bismol advertisement would be funny. Plus, it was really easy to draw. 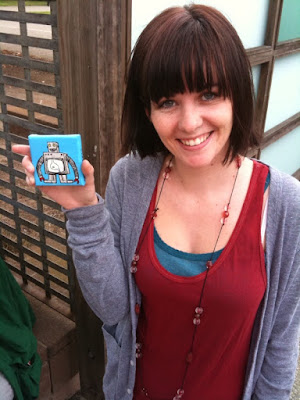 I also sold another 3" x 3" painting of an intoxicated snail to a couple (one of whom ROCK-agnized me) and gave a painting of a robot being air-lifted by a pterodactyl to my favorite artist at the festival, Josephine Allison Sayers, but forgot to take pictures of either of them! Shooots. Hey, if either of you read this, will you send me a picture of yourself with the painting so I can post them here?!
In conclusion, I'll totally be doing another of these, and absolutely be painting a lot more tiny art with low-low prices. Also, no one bought Frankin! What the hell?! Is he too expensive!? Too sad!?! He needs a home!!!
Posted by AdamD at 9:43 AM